Hebrews 10:10-18 God’s will was for us to be made holy by the sacrifice of the body of Jesus Christ, once for all time. Under the old covenant, the priest stands and ministers before the altar day after day, offering the same sacrifices again and again, which can never take away sins. But our High Priest [Jesus] offered himself to God as a single sacrifice for sins, good for all time. Then he sat down in the place of honor at God’s right hand. There he waits until his enemies are humbled and made a footstool under his feet. For by that one offering he forever made perfect those who are being made holy. . . And when sins have been forgiven, there is no need to offer any more sacrifices.

In anticipation of celebrating the pouring out of the Holy Spirit at Pentecost, I’ve been reading Scriptures about waiting. This one caught my attention, because it’s not us who are waiting. It’s Jesus. He’s sitting in the place of honor at God’s right hand waiting for his enemies to be defeated.

Doesn’t it seem like he should be out fighting his enemies, instead of just . . . sitting and waiting?

Thinking about this, several incidents flashed through my mind. Doctors say to us, “All that can be done has been done.” We ask, “So what happens next?” And they say, “We sit and wait.” 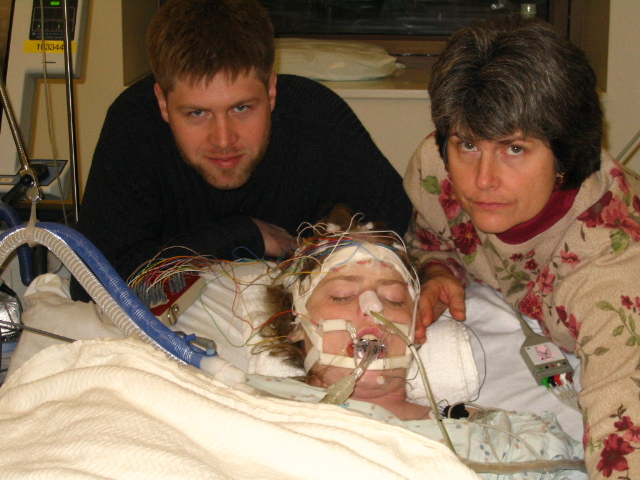 Aargh! If you’ve been in a situation like that, you know it feels like the toughest thing in the world. Give me something to DO!! But there’s nothing left to do. It’s all been done. Now, we just wait. Either the antibiotics will defeat the bad bugs before all her systems fail—or they won’t. Either the swelling and bleeding in her brain will go down–or it won’t. Either God wants her here with us a little bit longer—or he doesn’t.

That’s the whole point of this passage, isn’t it. Everything that could be done has been done. There’s nothing more for Jesus to do. He’s done it. Now he sits and waits to see whether we accept his incredible sacrifice, given willingly out of profound love for us. There’s nothing we can do except receive his gift. And that’s how his enemies are defeated, one by one—the enemies that have held us captive, but that he already conquered on the cross.

Psalm 110, that this passage quotes, was apparently a favorite among the New Testament writers and preachers, because they refer to it often. That means this concept—that everything that needed to be done has been done—was very important to them. Yet I so often want to add something to what has already been done. I want to make more sacrifices. I want to try to save myself. I want to somehow earn favor with God; then I’ll have something to be proud of. I’ll think I’m somehow more worthy.

As High Priest, Jesus sat down because there was only one sacrifice to be made, and he had made it. He had completed his work. The ball’s in our court now. Will we accept his gift, or keep trying to save ourselves?

3 thoughts on “But Jesus waits”

Tell YOUR “But God” story!

In one page or less, describe a time God intervened in your life. To post, send it to debrakornfield@gmail.com